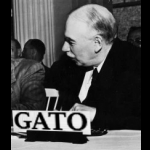 It's truly awe inspiring to see all the shit slinging here coming from micro brained people themselves. Just because you low gov in a big Alliance, even if it is my ally, don't make you any hotter a t