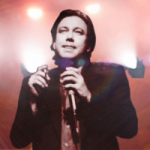 Oooh, I've been waiting for this one.